today. Already met some great people and I have to say, I wish I hadn’t been up early to eat breakfast with the kids, because the spread looks delicious!

A few introductions to kick things off, by Brian McDonald. Of particular note, a podcasting team:

http://www.damondnollan.com/p/room-3026-live.html will be doing interviews and discussions today.

Peter Shankman is up first with his keynote, in a few minutes…

Use Social and Viral Technologies to Supercharge your Customer Service!

Peter doesn’t “get” Pinterest, so he doesn’t use it, but otherwise is very active in social media.

he wanted to call this talk “the next revolution will happen in your pants”, but got voted down.

Backstory of Peter: He was in graduate school and with 18 credits to go, he lost his financial aid because his parents made too much money. He said yeah, my parents make too much money, but they keep it. That was his first experience with big government who had no sense of humor.

For the vast majority of us, social media is just a quicker way to screw up in a shorter amount of time.

In 1995, he was hired as one of the founding news editors for AOL news. He likens working with AOL to one of my personal favorite movies, Better off Dead. “Go that way, very fast. If something gets in your way, turn.”

in 1998, he decided he wanted to start a PR firm. But he had no money, living in a studio apt in Manhattan. He had a t-shirt made up that said “It Sank, Get over it”, making fun of Titanic. He made over 5K the first night in Central Park.

His website was printed in a story in the USA today, then he got invited to the Howard Stern show. In a short time, he made over 100K and started his PR firm. Would never work today because someone would take a picture and then make it himself. Lesson #1: Brand the hell out of anything you make, with your logo, website, etc.

He got it in his head that he wanted to train for Ironman. He made a silly video and posted it. The third day it had 37K views. He traced it back and realized that Lance Armstrong had tweeted it. Again, own your stuff.

Listen to your Audience. You do not control the direction of your company. The customers do. Example: Amazon used to only sell books. He polled the audience, no one he asked bought a book as their last purchase on Amazon.

He tells the story of  http://www.helpareporter.com/, encourages everyone to sign up.

You have to be Transparent. 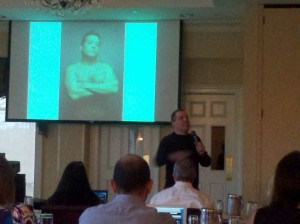 Get in front of a problem. Own it, shut it down. Examples are Spitzer and Weiner. One will be ruined for life, the other will be back in politics.

Get outside your comfort zone. [examples redacted for content], example of Peter posing for breast cancer awareness. Generated thousands of tweets and shares.

Ask your customers how they want to get their information. Podcasts? Blogs? Facebook? Gives example of donating to a non-profit and then getting a 7 lb. coffee table book. He contacted them and said “how much of my donation went to this book that I’ll never look at again.” Joined the board, asked the customers how they wanted to get their information, and 94% said online.

Brevity. The average attention span in the US is 2.6 seconds. Roughly 140 characters. The length of a… text message.

Embrace the concept, not the brand. The two reasons text messaging caught on in the US? 9/11 and American Idol. Gives example of being on a plane bound for the west coast and sending his dad a text that said “not my plane.” after he couldn’t get through with a call. His parents text constantly now, but don’t get Twitter. We live in a marketing bubble.

Learn to write. The ability to write is becoming a lost art.

Take control of your network. Peter went into a long rant about Facebook and how they control your “network”, emphasized the importance of interacting with “friends” more often than just their birthday. Reach out to 5 people each day.

Try to eliminate the word “I”. Think of it as Social You-dia.

Editorial Note: This is the best keynote I’ve ever been to.