Tales from a #Pubcon Virgin: Reputation Matters on Day 3 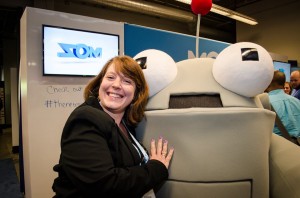 With my friend Roger at SMX Advanced 2013

The third day at Pubcon in New Orleans, LA did not disappoint. Like the other days, there was a clear theme that emerged as the day progressed, and this was one of reputation. More than just reputation management, and proactive monitoring, but the very heart of the issue – that you just can’t fake it.

The day began as I read news from the East coast that TMobile, WebDesign.org and iAcquire had gotten themselves into a bit of trouble. According to the coverage from Barry Schwartz (@Rustybrick), it all started with a tweet from WebDesign.org to TMobile, asking to renew the link they paid for on the site. Now a smart SEO would have replied with something like “DM me your email and let’s take this offline”, because as any good SEO knows, buying and selling links is against Google’s terms of service. But today, the person handling the TMobile account must not have known any better, and asked for details, which WebDesign.org was perfectly happy to provide – the exact location of the link, the anchor text used, and even mentioned that they had purchased the link through iAcquire. The rest of us watched in amused horror as the conversation continued, and finally Matt Cutts (@mattcutts) of Google stepped in with this “picture is worth a thousand words” tweet:

TMobile’s response was to delete all their tweets (like there was any point to that since there were already screenshots) and iAcquire, even as of the writing of this article, still is nowhere to be found. Apparently they are not monitoring brand mentions and they’re also not watching industry news.

This whole situation would be replayed over and over again throughout the day as I heard from one expert after another (many of whom hadn’t heard about the Tmobile situation yet) extoll the importance of monitoring, planning and reacting in a crisis.

Update 3/25: Still not a peep from TMobile or iAcquire, but WebDesign.org got a penalty.

The day at Pubcon began with a great keynote by Tim Ash (SiteTuners), who focused his talk on first impressions. People process visual cues far faster than anyone else… making an emotional decision about a stimulus in approximately 50 milliseconds. It’s very important to make a good first impression. He showed us a couple of examples of poor websites for companies with great reputations offline, and reminded us of the core principles of communicating authority, building trust, reducing anxiety and providing social proof.

The next session was added to the conference late, but was in my opinion the best one on the whole agenda. The SEO Mosh pit featured industry veterans Greg Boser, Tony Wright, Bruce Clay, Joe Laratro, William Leake, Stoney deGeyter, and Rob Garner, and the session was an unplanned discussion about the current realities and long term predictions for SEO moderated by Brett Tabke. Discussing everything from potential antitrust investigations for Google to the future of SEO as a discipline, the undercurrent of it all is that SEO has a really black eye right now. Between heavy handed penalties being handed down by Google, the war on affiliates and the continued scrutiny of links, we’re feeling under attack. As it was all week, another major point of discussion was the banning of the MyBlogGuest network owned by Ann Smarty (@SEOsmarty). I had the pleasure to talk with her at the wrap party last night, and I have to say, she is an impressive woman.  While I don’t agree with the way MyBlogGuest handled the VentureBreak situation, I admire Ann for sticking to her guns and refusing to cow-tow to Google’s insistence that everyone nofollow links – for the simple principle that it’s not natural behavior. I doubt she’ll be able to really make a difference to the SEO/Google war, but she’s made a difference in my life. Her reputation as a solid, ethical SEO is part of what’s making her a strong voice in all of this – otherwise, hers is just another torched link network.

After the SEO Mosh pit was more reputation discussion with Lisa Buyer (@lisabuyer) and Melissa Fach (@SEOAware). Lisa shared several stories of what not to do, and then Melissa shared a story of when Moz underwent a DDOS attack that was one of the most impressive case studies on how to handle a crisis that I’ve ever seen. I’ve asked her and Jennifer Lopez (@jennita) to write it up, but in the meantime, here are Melissa’s slides.

While it was impressive in itself that they were prepared with a crisis protocol, what was even more exciting to me was how their core audience rallied around them. Roger, the lovable Moz robot, was under attack in his fans’ eyes, and they circled the wagons around him and directed their anger outward at the attackers. That’s all you can ask for in a situation like that.

Reputation is all about first impressions and connections. Pubcon certainly made a good first impression on me. I’ll be looking forward to sharing Tales from a Pubcon Speaker (I hope!) from Vegas this fall, and I hope your first impression of me has been good enough that you’ll join me for it.